The prolific Scottish composer Sir James Macmillan (born 1959), whose works include symphonies and a widely praised opera based on the Welsh Mabigonion legends,  is probably best known for his exciting 1992 percussion concerto Veni, Veni, Emmanuel, written for the celebrated percussionist Dame Evelyn Glennie. But he is also the oldest of a group of British composers, including Bob Chilcott and Paul Mealor (Pro Coro’s former composer-in-residence), who have followed the lead of John Tavener (1944-2013) in reviving British religious choral music.

Macmillan is a practicing Catholic, and at the heart of his choral output are two great Passions that hark back to the Passion concepts of Bach’s time. The St. John Passion appeared in 2007, and the St. Luke Passion in 2015. A St. Mark Passion, a more intimate setting, is in progress, and Macmillan plans to write a St. Matthew Passion to complete the cycle.

The St. Luke Passion, given on March 25th in All Saints’ Anglican Cathedral in Edmonton by the Da Camera singers, joined by the Concordia Concert Choir and the Ariose Women’s Choir, does indeed cast a look over its shoulder at Bach (and even quotes a Bach chorale from the St. Matthew Passion at one point) but both the structure and the format are decidedly Macmillan. He sets Chapter 22 and 23 of St. Luke’s Gospel in its entirety, word for word (inevitably both extending events and being rather bound by the at times somewhat prosaic text). He also has a prologue and an epilogue, the former covering the Annunciation, the latter (from Acts), Christ’s resurrection, thus encompassing the whole Jesus story.

Then there are no soloists in this Passion. Instead, the words (the role, in Passion terms) of Christ are sung by a children’s chorus. An adult chorus sings the rest of Luke’s text and therefore takes the traditional role of the Evangelist. This rather surprising decision was intended to express the universality of Christ, and also emphasize his innocence. In practice, having a chorus singing these parts does de-individualize (I was tempted to write ‘dehumanize’) the central figure of the drama, not always to the work’s advantage. In this performance that feeling was underwritten by having not a children’s chorus but the adult women’s voices of the Concordia Concert Choir and the Ariose Women’s Choir. This practice has been sanctioned by the composer, but it does lose some of the original effect (John Brough, the conductor, told me that he had tried to get a children’s choir, but the performance was scheduled for the end of the school March break, making it difficult for choirs to commit).

Macmillan’s setting is strongly dramatic, with the characteristic Macmillan touches of fierce boldness against softer thoughtfulness. It is through-composed, rather than a numbers Passion (inevitable, given that every word of the two chapters in St. Luke is set). There are the occasional reminiscences of the Britten of the War Requiem (the standing chords near the beginning, and in some of the muted brass writing, or the high soprano choral writing in Chapter 23). The music is always ‘approachable’, never straying that far from a tonal origin, even in the interweaving polytonal strands of the end of Chapter 23.

None of the actual music jumps out as being instantly recognizable as Macmillan. For his style is dependent on the juxtaposition of ideas, and also a kind of continuous restlessness, rather than a highly individual idiom, and it is this combination that marks his music out. Here much of the choral writing is quite high, adding to the edginess. Among all the drama, there are virtually no moments of repose from the nervous flow of ideas at all, and I know I am not the only one who feels that eventually this kind of assailing of the senses outstays its welcome. It also is a surprisingly unspiritual work: just as the settings are of syllabic prose, unmixed with the poetry of a Bach passion, so the music, with its concentration on dramatic effect, feels theatrical rather than having the transcendental inspiration of, say, Penderecki’s St. Luke Passion.

There are, of course, some marvellous things in this Passion, for Macmillan is the master of choral moments.  The opening of Chapter 22 is very dramatic. Peter’s betrayal is quite poignant. There are some effective crowd effects, and a prominent organ part (played here by Jeremy Spurgeon). There is drama and darkness in the great outbursts of Chapter 23, but there is one passage that perhaps typifies the strengths and failings of the work. In the final prologue, there are some magical musical effects as the choir sing  a quasi-Gregorian chant against scurrying lower instruments in the orchestra (very well played and balanced here). Christ is risen, the work does almost reach a transcendental plane, one expects it to end, and then suddenly kind of Orientalism is heard in the orchestra, together with Hollywood type choral “aahs”. Any sense of the Divine is lost, as if Herod and his chief advisors had just wandered in to the wrong studio stage and taken over – all in less than six minutes.

This very large scale work, both in terms of forces and of length (some 75 minutes), and it was a bold decision by the Da Camera Singers and their conductor John Brough to present the work. They were joined by an effective and accomplished in-house orchestra, of Handel-esque size and composition, with many ESO players taking part. The resulting performance certainly made a brave stab at presenting the strengths of the work, but it has to be said first that wider contrasts in both dynamics and in tempi would have brought out even more the drama that is at the base of the music, and second that the choral singing could have been quite a lot tighter, especially in their entrances. That said, it was well worth tackling those difficulties, for in spite of those reservations, Macmillan’s music did come across, and this was a welcome opportunity to hear the work live.

It was certainly no fault of the performers that ultimately Macmillan’s work fails in its ambitions, music of theatrical effect rather than profound substance. The slip of a writer’s pen in the program booklet actually summed up the work: “Singers participating in tonight’s production.” You would never use that word of Bach.

This review was amended on April 24 with updated information about the children’s choir situation for this performance. 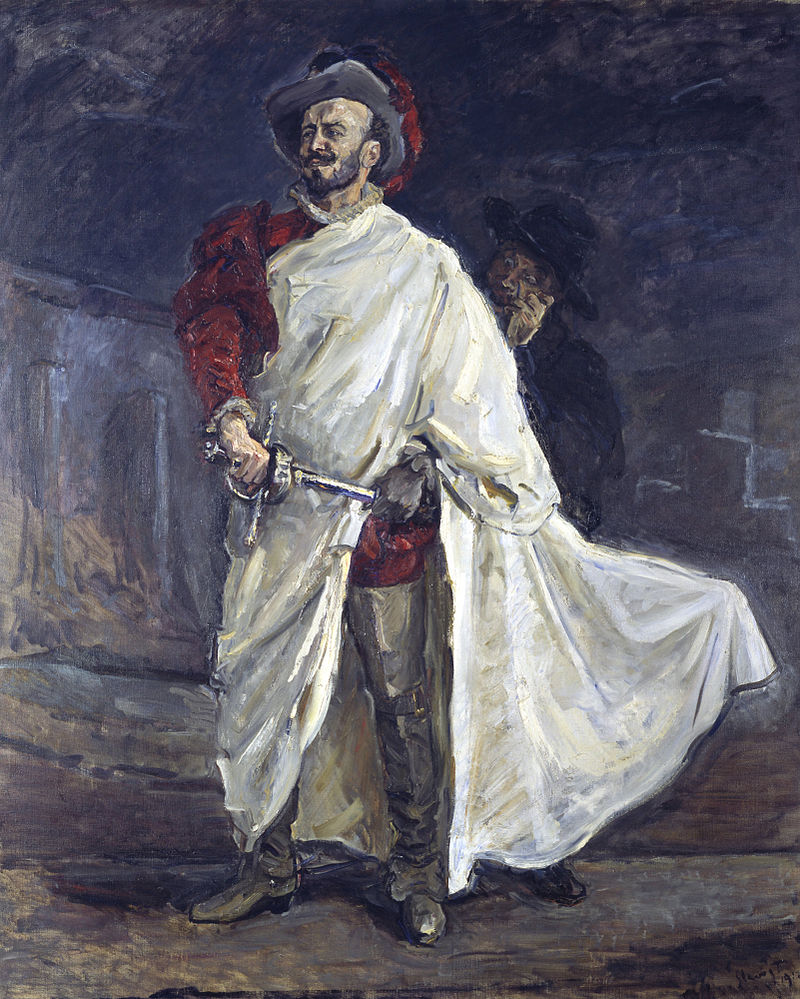 Portrait of Francisco D’Andrade in the title role by Max Slevogt, 1912

For Mark Morris’ review in the Edmonton Journal of the Edmonton Opera production of Don Giovanni, which combines some stunning sets, costumes, and lighting, with a generally strong younger cast, click here.